Going along with good results of Britain in the first European World Cup event in 2013, Alison Young has paired up with Scott, the 2011 World Champion, in a persuasive performance after his return from America’s Cup training. They made it with the highest position when the competition went to an end. 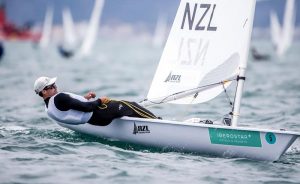 Ranking right after them is the pair of Sophie Weguelin and Eilidh McIntyre with the silver medals. And finally, Dave Evans and Ed Powys had reasons to be proud with their final ranking as this is the first time they were able to get in the World Cup podium finish with a bronze.

Young has made her first win in World Cup last June in Weymouth. At this regatta, a new scoring format is used with two double-points medal races to be added for Olympic competitors.

With smart racing tactics, Giles Scott started off comfortably to eliminate Pieter Jan Postma, the Dutch racer, in the final Finn race. Before the defeat, Postma had successfully narrowed the distance with Scott to just one point after the first two races.

However, the Finn medal races ended with two wins fromm British competitors. They are Mark Andrews and Andrew Mills, who completed their regattas respectively in sixth and fifth places.

Italian Flavia Tartaglini overturned the British windsurfer Bryony Shaw in the RS:X women’s event after two race wins. Ahead of this defeat, the British had led the race with a narrow distance. Bryony Shaw had brought another silver medal in addition to her previous World Championship silver last month.

Stephen Park, RYA Olympic Manager, thought that the results proved a good start for this season competition. However, he remained unsure about the trialled racing format in Palma. With the new scoring format, Park said that it would be more challenging for sailors, race teams and organizers.