Talking about competitive racing, we can consider different kinds of races. According to the International Sailing Federation, there are :

This one is the most popular form of competitive sailing. It involves racing boats in which there might be until hundreds of boats going around a course. There are two types of fleet races formats. The first type of race can be one-design. It means that all boats competing belong to the same class : same sail area and same design. The second type is the handicap racing. In this format, boats racing come from different classes. In this type of racing, the start time as well as the finish time can be adjusted according to each boat handicap. For example, the slowest boats go first while the faster ones start a bit later.

This type of race involves two identical boats which are going to make their best to cross the finish line first, in order to be the winner. This duel is full of many strategies and tactics deployed by each boat to reach their objective. Usually, a match racing course takes around 20 minutes and consists of a windward/leeward course. 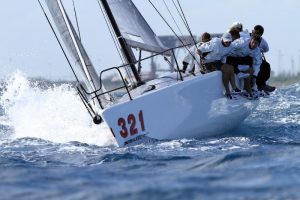 Team racing consists of two different sailing teams competing against each other. Each team might have two to four boats implied in a course. If the boats belong to the same classes as in the match racing, the principle is totally different. This is a fast-paced racing which lasts around five to ten minutes. The first which crosses the finish line is not the winner in this case. To determine the winner, the points gained by each boat of each team are combined to give a final score. The team which has the lowest score is the winner.